* Source: http://www.naruto.com/j/
Naruto is a popular manga series from Japan that was first published in the best-selling manga magazine Weekly Shonen Jump. Since then, it has developed into anime, movies, live-action versions, and various media, and is also very popular overseas. This article explains some of the famous lines from the Naruto series. 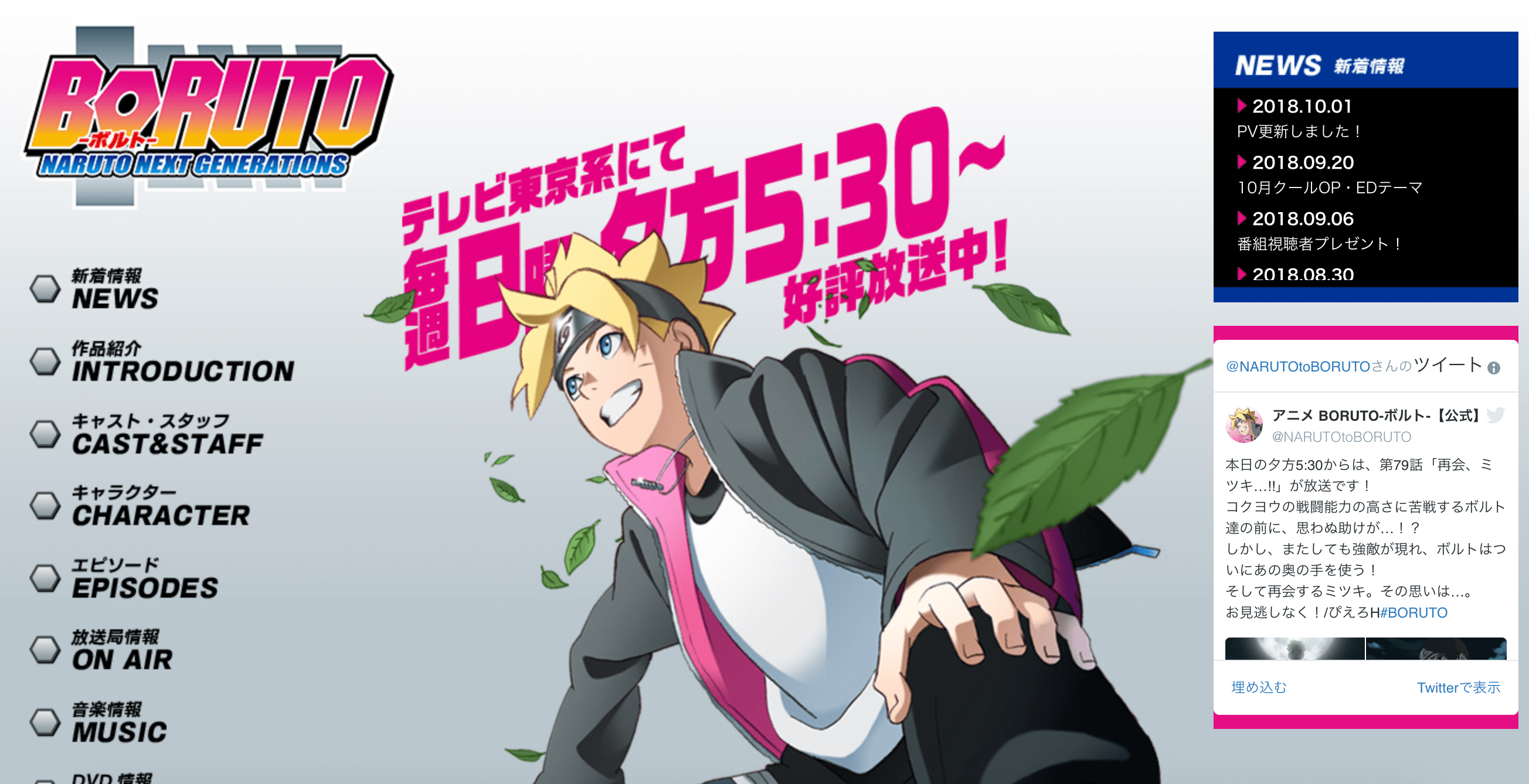 * Source: http://www.tv-tokyo.co.jp/anime/boruto/
The Naruto series is a shonen manga for young male readers created by Masashi Kishimoto and was published in the Weekly Shonen Jump manga magazine from 1999 to 2014. It has since then developed into anime, games, and many more. There are a total of 72 tankobon volumes of the manga series. The sequel series Boruto is also currently being published in the Weekly Shonen Jump. Anime versions are also being aired.

1. まっすぐ自分(じぶん)の言葉(ことば)は曲(ま)げねえ…オレの…忍道(にんどう)だ！！ Massugu jibun no kotoba wa magenee… Ore no nindooda!!
(I won’t go back on my words. That is my ninja way)

This line appears in Chapter 43 of Volume 5 and is said by our hero Naruto when he was taking a written test for the Chuunin Exam. Naruto responded with this reply when he was threatened by the examiner that he would not be allowed to take the Chuunin Exam again if he failed to answer the next question. It shows Naruto’s determination to take the exam. In the end, the examiner’s threat remained an empty threat and Naruto successfully passed his written test.

If we write this expression in easy-to-understand Japanese, it becomes “まっすぐ自分(じぶん)の言葉(ことば)は曲(ま)げない。わたしの忍道(にんどう)だ。 Masugu jibun no kotoba wa magenai. Watashi no nindoo da.” “曲(ま)げねぇ Magenee” is a male expression for “曲げない Magenai” (to hold on to, to be steadfast). Changing “ない nai” to “ねえ nee” turns the speech to a rough expression. It is used in examples such as “たべねえ（たべない） Tabenee (tabenai)” and “好(す)きじゃねえ（好(す)きじゃない） Suki janee (suki janai)” and often appears in shonen manga.

2. 火影(ほかげ)はオレの夢(ゆめ)だから Hokage wa ore no yume dakara
(To become the Hokage is my dream!)

This line appears in Chapter 158 of Volume 18. Naruto was engaged in a battle with Tsunade, one of the Sannin (three renowned ninjas) of Konoha when the latter told him to give up on being the Hokage. Naruto refused despite being at a disadvantage and said this line.

“から kara” (because) is used to express a reason. Naruto is actually saying “火影(ほかげ)は私(わたし)の夢(ゆめ)だからあきらめない Hokage wa watashi no yume dakara akiramenai” (To become a Hokage is my dream, so I won’t give up!) “あきらめない Akiramenai” is omitted. When there is a shared context or topic between the speaker and listener in which both parties know exactly what they are referring to, it is common in Japanese language to omit that shared context.

This line appears in Chapter 167 of Volume 19 and is said by Naruto in his battle with Orochimaru and Kabuto. His hand was injured by Kabuto in the battle. Tsunade was worried about him and Naruto said the above to console Tsunade.

If we write this expression in easy-to-understand Japanese, it becomes “私(わたし)は火影(ほかけ)になるまで、絶対(ぜったい)死(し)にませんから、（だいじょうぶですよ） Watashi wa Hokage ni narumade, zettai shinimasenkara, (daijoobu desuyo)” (I will definitely not die before I become a Hokage [so it’s ok]). Naruto wanted to tell Tsunade not to worry and that it’s ok.

This line appears in Chapter 486 of Volume 52. Naruto was questioning Sasuke, who was bent on destroying the Kohoha village, over his obsession for vengeance and power. He was trying to dissuade Sasuke from his criminal acts because he considers the latter an important friend.

5．オレが諦(あきら)めるのを諦(あきら)めろ Orega akirameru no o akiramero
(Give up on making me give up!)
(All these years… Thank you for your damn kindness)

This line appears in Chapter 442 of Volume 47. Naruto said this while engaged in a battle with Pain, a former disciple of his teacher Jiraiya. Pain was relentless in his attacks against Naruto but Naruto would not give up and eventually defeated Pain.

To paraphrase this line, it becomes “私(わたし)が諦(あきら)めるのを諦(あきら)めなさい Watashi ga akirameru no o akiramenasai”. “あきらめろ Akiramero” is an imperative form used to command or order someone to do something. It is rarely used in real life but it often appears in battling scenes in manga such as “死(し)ね shi’ne” (die) or “殺(ころ)せ korose” (kill).

So how was it? We’ve explained some famous lines said by Naruto in this article. Learning Japanese is difficult but you can start first by watching anime and reading what the characters say using the subtitles. Stay tuned for other articles on learning Japanese with anime and manga.
※ The English translation in this article may differ from the actual English version of Naruto.